On December 8, 2016, the Division of Conservation Services of the Massachusetts Executive Office of Energy and Environmental Affairs announced an award of $85,000 to The Andover Village Improvement Society (AVIS), Andover’s local land trust.

With this assistance from the State, AVIS has now reached more than 80% of its goal to raise $400,000 to purchase the river front property from its current owner, Melmark New England. (Read More)

Protect the Merrimack River and the Bay Circuit Trail on the former Franciscan Seminary property. (Donate)

As of September 1, 2016 AVIS has raised more than 50% of its $400,000 goal from foundations and AVIS leadership donors. We ask the community to support this effort to protect the riverfront and the Bay Circuit Trail in Andover. A full description can be found in this document.

June 6, 2015 is American Hiking Society’s National Trails Day®, the country’s largest celebration of trails. National Trails Day events will take place in every state across the country and will include hikes, biking and horseback rides, paddling trips, birdwatching, geocaching, gear demonstrations, stewardship projects and more. If you are interested in learning more go to their website at http://nationaltrailsday.org/

AVIS has reached an agreement to exchange land with Ironstone Farm to open a section of trail off Lowell Street. Please see the front page article in the Spring 2015 Update for more information.

AVIS has completed negotiations with owners of land in West Andover to acquire a parcel along the Shawsheen River. This purchase should be completed by the end of July 2015 and will help protect the River from future development as well as establish the southern portion of the Shawsheen River Greenway.

The Andover Village Improvement Society (AVIS) is the recipient of a bequest from the estate of Ellen F. Fraser, long-time resident of Andover. In 2011, AVIS received notice that it was remembered in the will of Ellen F. Fraser. Bequests are an excellent way for friends to remember their favorite charities. AVIS was notified in late 2013 that the amount of the gift was $62,700. This is the largest amount given by Mrs. Fraser to any one organization, out of a total of 16 gifts to area organizations. Mrs. Fraser lived on Boutwell Road in Andover for many years with her late husband, Robert Fraser, former President of the Community Savings Bank in Lawrence. As described in her obituary in the Lawrence Eagle Tribune, Mrs. Fraser was a lover of nature and “…a member of many organizations, such as the Lawrence Garden Club, the Daffodil Society, and the Horticultural Society. At age 90, she even won a ribbon for a flower arrangement at the Topsfield Fair.” Mike Timko, President of the AVIS Board of Trustees, noted that Mr. & Mrs. Fraser, as avid hikers and skiers, were very active users of the more than 35 miles of trails in Andover that are held in trust for the public to use. He indicated that AVIS is indebted to Mrs. Fraser for her wonderful generosity in remembering AVIS in her will and went on to say that “The AVIS Trustees voted to add these resources to our Land Acquisition Fund so that additional land may be purchased for future generations to use, just as the Frasers would have wanted.”

AVIS hosted a booth As part of the Annual Andover Day event that closes Main Street in Andover for a day of celebration and entertainment.

In September 2014 AVIS collaborated with the Andover Historical Society and the Addison Gallery of American Art at Philips Academy to provide coordinated events in Andover for the Essex National Heritage Trails & Sails event. This was the second year of collaboration on events designed to attract visitors to Andover. As part of over 150 events that highlighted the historic, cultural and natural sites in Essex County, AVIS sponsored two hikes, one along the Shawsheen River and one in the Sakowich/Bakers Meadow reservations. Look for information about AVIS hikes as part of the Fall 2015 Sails & Trails event.

In April 2013, AVIS hosted over 90 people at the dedication of the Shawsheen River Greenway, an improved trail that stretches from Ballardvale to Central Street near the Horn Bridge. In the two years since that dedication countless individuals have hiked, skied, and snow shoed this beautiful stretch of Andover property. Now AVIS is working with other citizens of the Town who are interested in replicating this Greenway model along further sections of the Shawsheen River. There are beautiful stretches of the River between Central Street and Essex Street. Part of this collaboration includes working with the organizers of Andover Tomorrow, a Town sponsored group that is looking at ways of revitalizing Andover’s Historic Mill District along Essex Street at the Shawsheen River. Many communities have reclaimed their riverfronts, many lost to industrial and commercial purposes for over 100 years. These communities recognize the benefits of creating for new uses for these areas and Andover is planning to do the same. 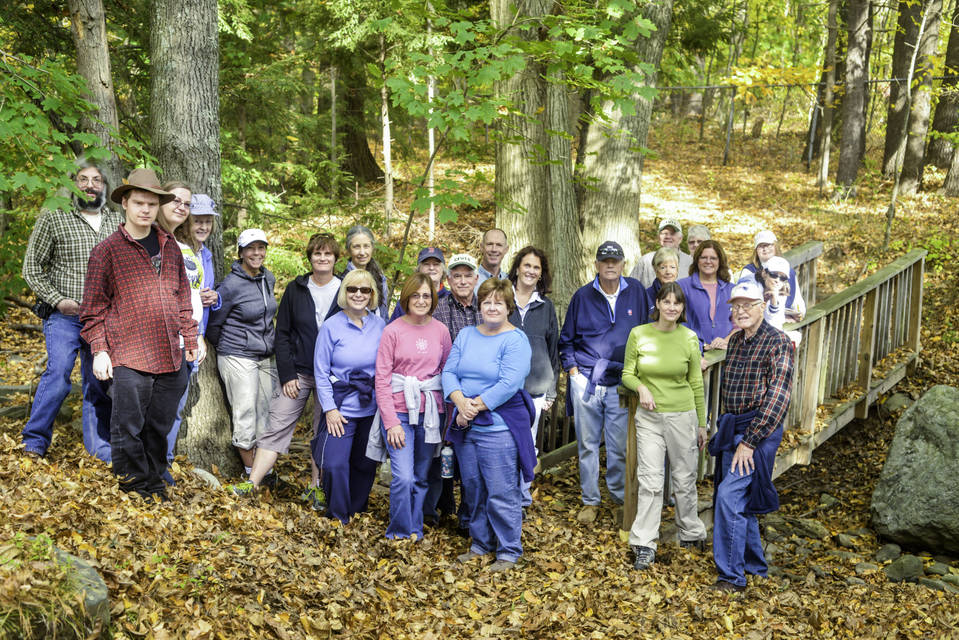 On October 19, 2013, the Andover Village Improvement Society (AVIS) sponsored a successful hike along the Merrimack River. The hike was held in conjunction with the Andover Historical Society (AHS) and introduced thirty (30) hikers to the AVIS Deer Jump Reservation and the Town of Andover’s Merrimack River Reservation. The hike, which lasted two hours, was led by John Hess, Vice President of AVIS, and Jane Dietzel Cairns, President of the AHS. Ms. Cairns provided the narration during the hike based on her research into the history of the area. At the first stop along the river Ms. Cairns showed the participants a large stone with a plaque honoring Harold Rafton, a former AVIS member, who spearheaded the purchase of the riverfront for AVIS beginning in the 1950’s. She discussed the history of the ownership of the land along the river. In the mid-19th century, the Essex Company purchased the land from local farmers to protect the watershed from development and eventually built the Great Stone Dam in Lawrence to provide water power for the mills.

At another stop, hikers learned that archeological digs as well as the daily work of many farmers have uncovered artifact from the Penacook Indians who used the river banks for fishing and hunting. Evidence suggests that these Native Americans lived here only part of the year but the question is still open, as some experts think they may have lived along the river year round.

Finally, the group stopped at a scenic point of land that included one of many ferry stops that are believed to have been along the river during the 18th century. The ferries were used by siteseers and party goers who would come from up and down the river to picnic, in this case at Laurel Grove, a locally owned venue that catered to those who sought a day along the river. 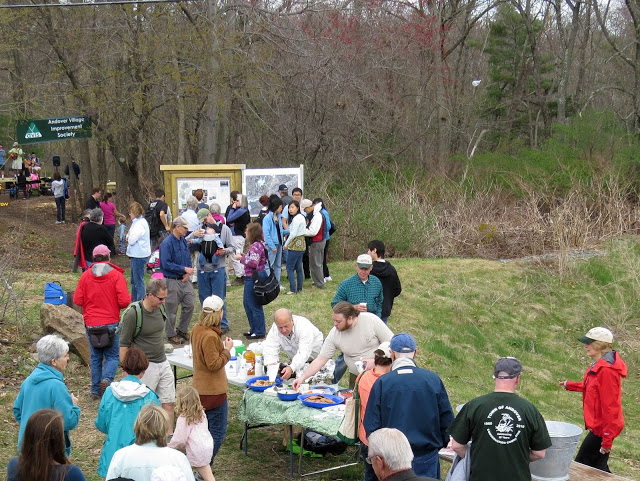 Vale Trail gathering - Some of the 175 people who attended the dedication of the Shawsheen River Greenway by AVIS on 4/27/13 stop for refreshments. 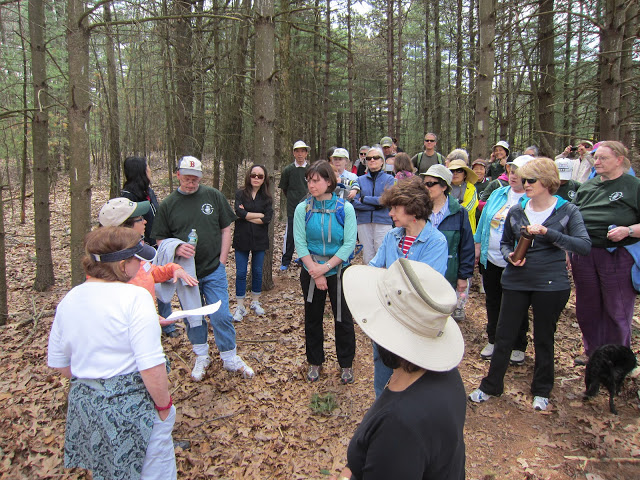 Vale Trail hikers - A group of the 175 people who attended the dedication of the Shawsheen River Greenway by AVIS on 4/27/13 listen to Amy Janovsky discuss the plant life along the trail. 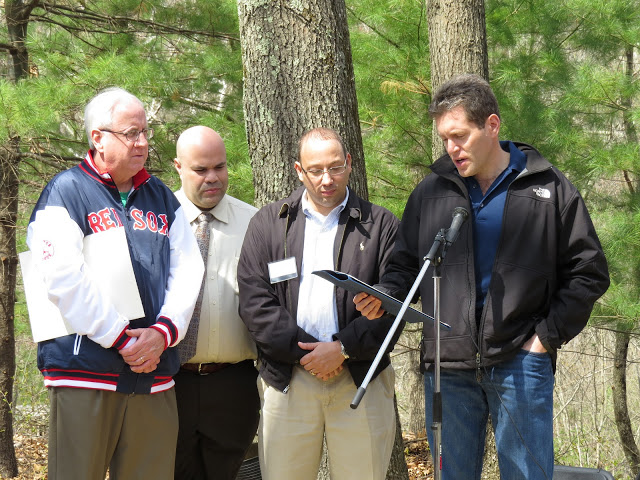 Latest Editions of the AVIS Newsletter 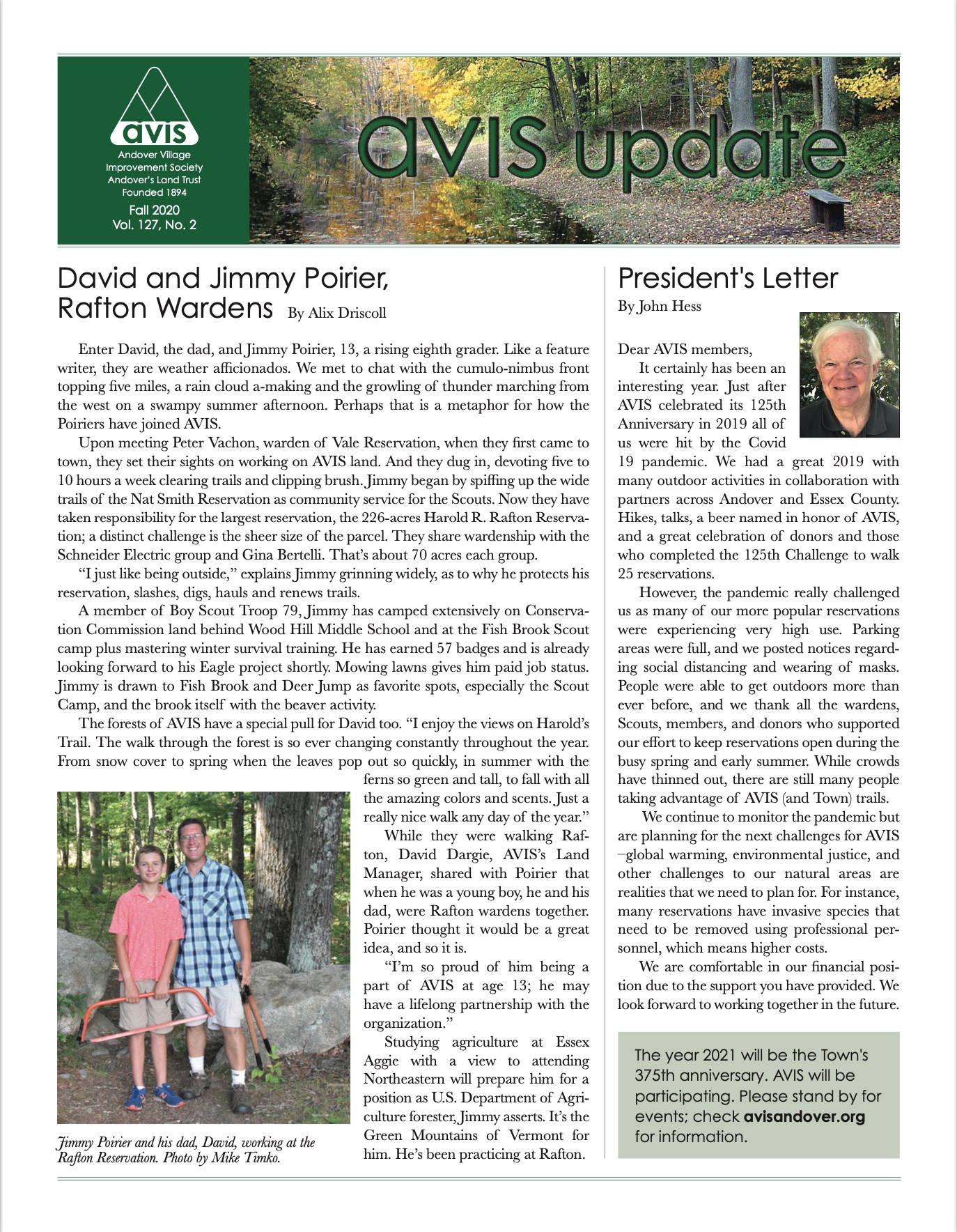 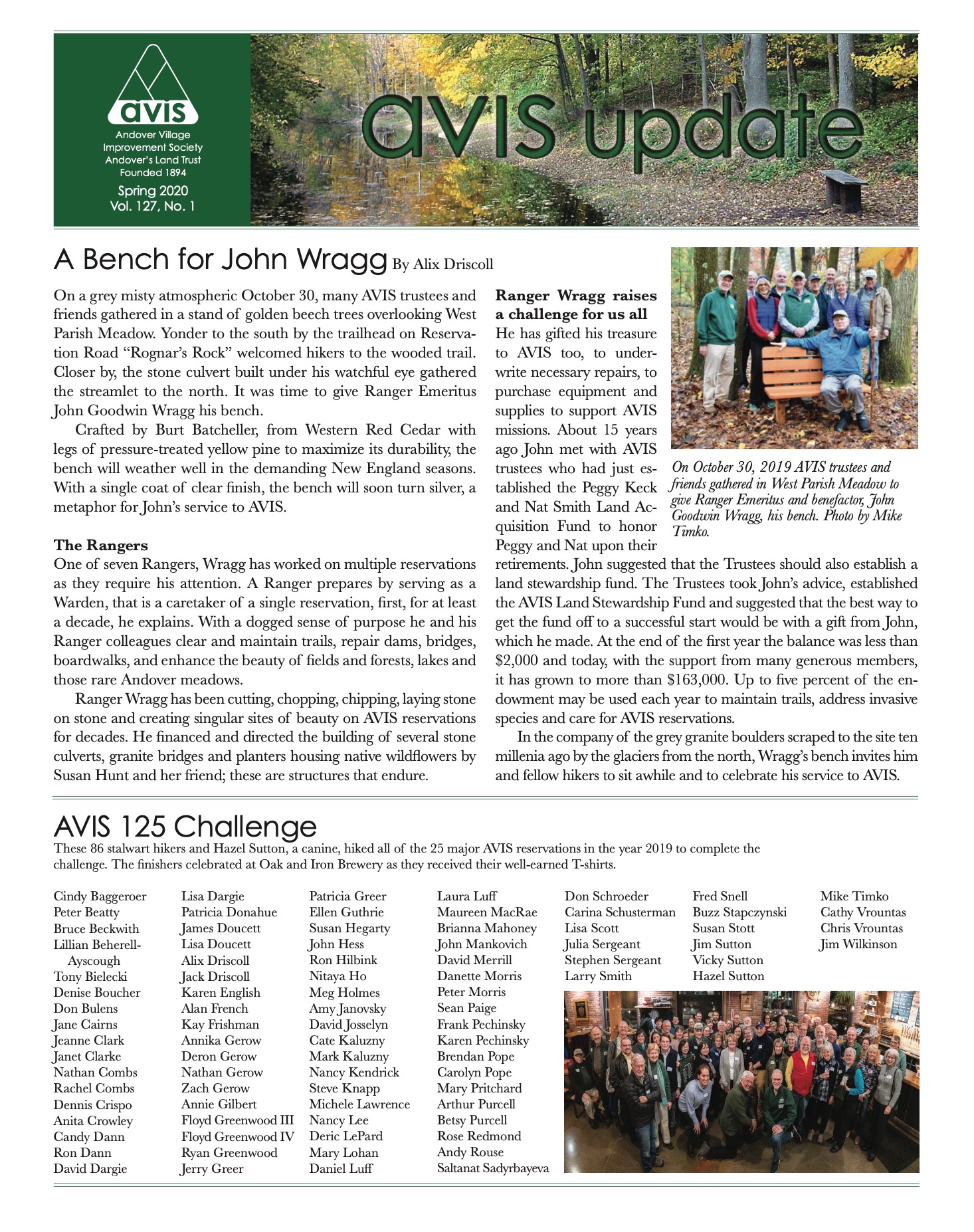 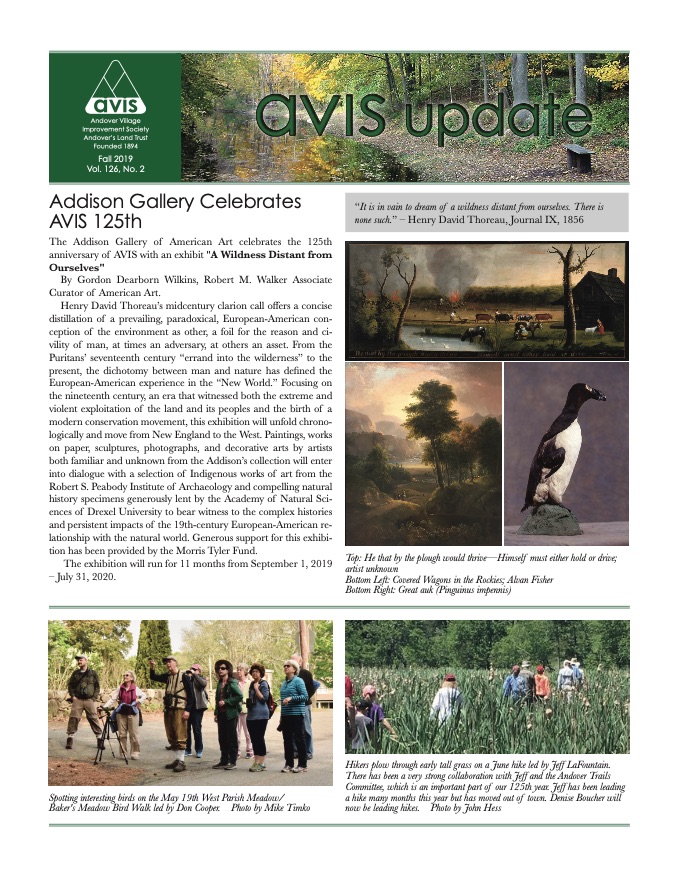 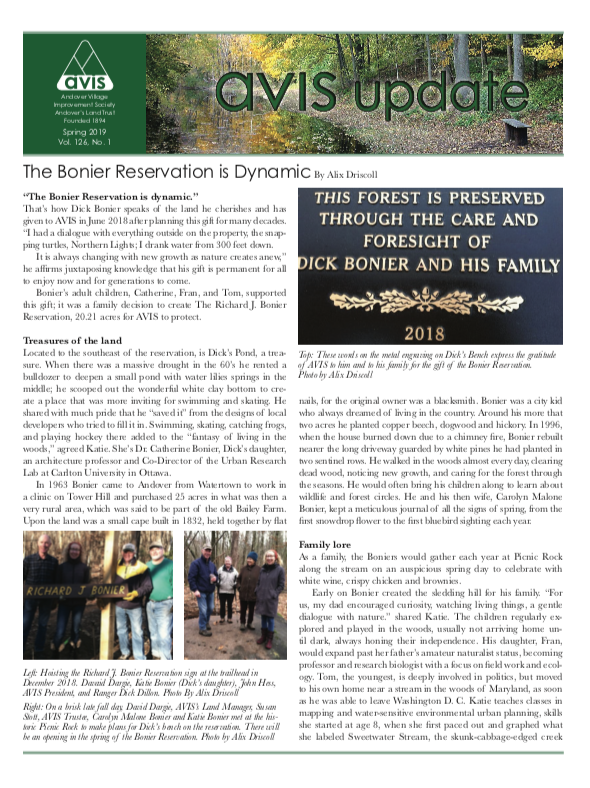 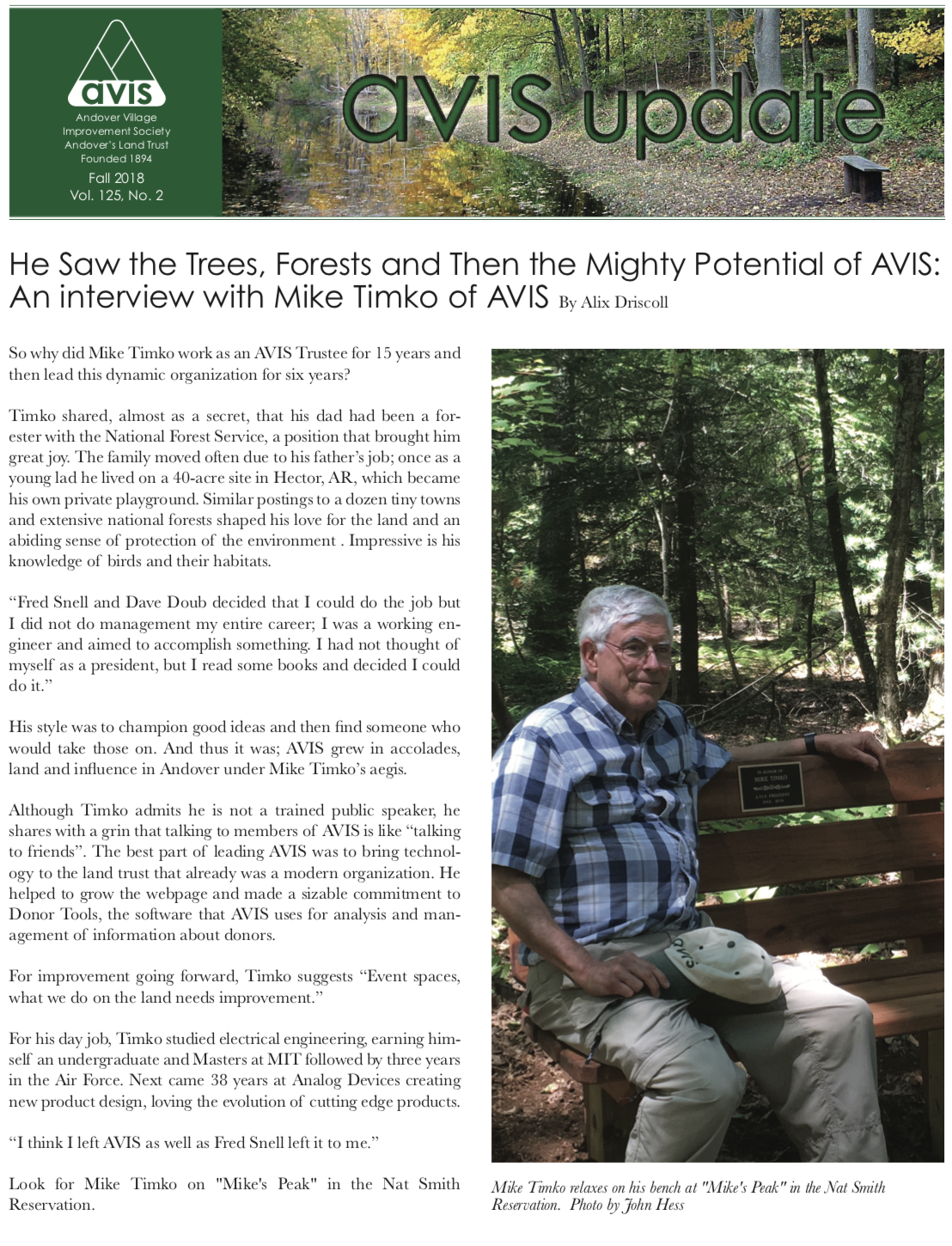 Suggestions for the AVIS Update can be sent to update@avisandover.org