Meandering northward through the middle of Andover, the Shawsheen River offers canoeists and walkers a chance to observe wildlife and water plants at close range. The river is shallow between Ballardvale dam and Abbot Bridge, but still canoeable in all except the driest times. Extensive cattail marshes make walking difficult along the east side of the river. However they provide excellent habitat for geese, ducks and occasional herons, muskrat and painted turtles. The AVIS reservations on the west side of the river offer fields, woodlands, and excellent views of the river.

The Claus Dengler Trail, named for a former AVIS president, runs the length of the Shawsheen River from the Abbot Bridge to Ballardvale, a distance of about 1.5 miles. Enter the Shawsheen River Reservation at the Abbot Bridge and follow the path over a short wooden bridge and Baker’s Meadow Brook. Just after the bridge, the trail splits. It runs straight across a field, and left, following the river. Take a left for the Claus Dengler Trail. Cut through a stone wall, bearing to the left and then follow the path along the river.

In about 1/3 mile is the so-called “Octopus Tree.” The roots of this ancient tree are exposed, giving the appearance of tentacles. Continue on the trail, past an intersection with the field trail. Stay to the left to continue on the Claus Dengler Trail. At the next intersection, the trail to the right follows the railroad tracks; the trail to the left follows the river. The two trails converge shortly, cross a boardwalk, and the trail ends at the parking lot at the end of Dale Street.

The Shawsheen River rises gently from a Bedford meadow, eventually flowing into the Merrimack River. Its name comes from the Indian words for “Great Spring” and “Beauty’s Pathway.” This reservation was purchased from Chester D. Abbott in 1963. 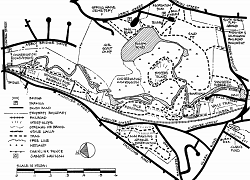 Between the Shawsheen River to the East, Andover Road to the West, Central Street to the North, and Vale Reservation to the South.